Between December 2004 and April 2005, the following musicians performed at the Flagler Museum.

A brilliant young violinist, Andrew Kohji Taylor has performed in major centers such as London, Paris, Berlin, and Tokyo. The Boston Globe raves, "though he has technique to burn, he wears it lightly," and praises his "gorgeous virtuosity." And, The Washington Post declares him "an exceptionally soulful emerging violinist." He has appeared in recitals in Washington, DC, Boston, and Tokyo and has performed as soloist. Also highly sought after as a chamber musician, Taylor has participated in the Marlboro and Berlin Philharmonic Chamber Music Festivals. He plays a Stradivarius dated 1727.

"The sixth season of the Flagler Museum Music Series started Tuesday with an evening of superb music played by violinist Andrew Kohji Taylor in what has established itself as one of the best chamber music series in South Florida." – Palm Beach Daily News 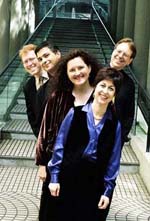 Specializing in Baroque music for mixed wind/string ensemble, Musica Pacifica has been performing, touring, and recording since 1990. Their stylish, high-energy performances have consistently received enthusiastic reviews from critics and audiences alike. The Los Angeles Times praised Musica Pacifica for their "lively virtuosity... and a wonderful feeling of vivacious spontaneity, belied by stunning precision of execution," while The Washington Post called their performance "elegant and lively." The ensemble has appeared in prestigious chamber and early music concert series and have performed at festivals around the world. They have been heard on German National Radio, as well as on National Public Radio's Performance Today and Harmonia. Musica Pacifica's CD releases have received international acclaim, including the highest ratings in music recording magazines.

"The combination of Musica Pacifica's recorder player Judith Linsenberg's nimble lips and fingers provided a truly memorable rendition. In the continuo section, David Morris and Charles Sherman displayed a deep understanding of their instruments and repertoire. Throughout the performance, the Whitehall concert room proved to be the ideal location for the ensemble." – Palm Beach Daily News 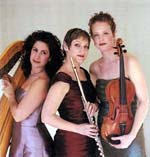 Auréole's unique and colorful instrumental combination of flute, viola, and harp has captivated audiences around the world. Of the trio's performance, The New York Times noted "the three fine musicians of the Auréole ensemble... played deftly." The Washington Post hailed them as an ensemble who "play with effortless technique and a fine sensitivity to the music and to one another." Auréole has performed extensively throughout the United States and abroad, and has participated in numerous artist-in-residence programs at universities and in communities across the country. They have made numerous appearances on National Public Radio's Performance Today and their first CD, which received international acclaim, was short listed for three Grammy nominations.

The Lark Quartet enjoys a reputation as an ensemble of the highest artistic integrity and versatility. Winners of the prestigious Naumburg Chamber Music Award and Russia's Shostakovich Competition Gold Medal, the renowned ensemble has performed throughout the world. Appearances at top American venues include Carnegie Hall, Lincoln Center, Kennedy Center, Library of Congress, University of Chicago, and the Krannert Center. "The Lark [Quartet] unsheathed a glittering array of timbres... they are women of extraordinary ability," hailed The Washington Post. The Boston Globe praised the group as "dynamic, accomplished, and imaginative musicians." Prolific recording artists, the Lark Quartet was the subject of a video documentary which aired on National Public Television and the group has served as ensemble-in-residence at numerous colleges and universities around the country.

"The four Lark Quartet women are all gifted musicians and play with admirable cohesion and tonal finesse. The players dispatched the Scherzo's cross-rhythms with flair. Ravel's Très lent drew the finest playing of the evening." – Sun Sentinel

Trio Solisti brings together three of the most sought after artists of their generation. The members of Trio Solisti have performed at Alice Tully Hall and Weill Hall in New York City, Jordan Hall in Boston, The Kennedy Center and Library of Congress in Washington, DC, Spivey Hall in Atlanta, and throughout the United States, as well as around the world. The Trio's members have been called "masters of touch, color, dynamics, and style," by The Boston Globe and their performances praised as "crisply lean, warmly lyrical, and unexpectedly sensuous," by The New York Times. Festival appearances by Trio Solisti include the Marlboro, Caramoor, Norfolk, Aspen, and Chamber Music Northwest. They have been frequent guests of the Chamber Music Society of Lincoln Center and have collaborated with such renowned artists as Yo-Yo Ma.

"Trio Solisti was exemplary here, finding the right balance between lightness of touch and expressive effect at every turn. All in all, it was a most eloquent and rewarding way for the Flagler Museum to wrap up its concert season." – Palm Beach Daily News