The theme of the 24th annual Whitehall Lecture Series is Sports Legends of the Gilded Age. The Series presents expert scholars, authors, and speakers from prominent museums, universities, and cultural institutions from around the world. A special reception with the speaker follows each lecture. Patrons who purchase a series ticket will also receive a bound copy of the Whitehall Lecture Series Essays. 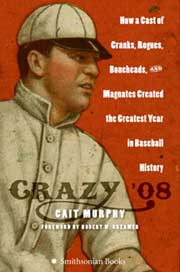 Often regarded as the greatest season for pennant races in baseball history, the antics of 1908 season is full of iconic performances by baseball's first generation of heroes. Honus Wagner may have the best season of the century. Ty Cobb would kick, snarl, and manhandle the Tigers into contention; Cy Young, the only man with more than five hundred wins, has his last good season, Shoeless Joe Jackson would play for five games, and decide it wasn't for him. Beyond the legend making games there was corruption, greed, stupidity and downright weirdness that makes today's sport of sanctimony and clean behavior look boring.

It isn't surprising that 1908 is considered the year that baseball came of age. From the colorful heroes it produced to being remembered as the last year the Chicago Cubs went to the World Series, only to have a game considered a tie after riots left two people dead. The era's brawling, vivid ugliness, and plain bizarre moments led Fortune magazine editor Cait Murphy to pen "Crazy '08: How a Cast of Cranks, Rogues, Boneheads, and Magnates Created the Greatest Year in Baseball History." Her book has been hailed in publications nationwide, from Sports Illustrated to the Chicago Tribune. It got a glowing review by political columnist George Will in The New York Times. Murphy has also written for the Economist magazine and the Wall Street Journal

Coach Richard Glendon lead a humble Annapolis rowing team to victory against illustrious Ivy League teams, and broke the class barrier in a sport dominated by the privileged. After the miraculous victory, the U.S. Naval Academy team won a shot at the Olympics. Their mission: to defeat the British Navy, whose supremacy of the seas for hundreds of years naturally made them the dominant rowing team. With the hopes of a nation, Annapolis went into the heart of Europe and in thrilling fashion defeated the heavily-favored Brits to win the gold medal in 1920. With Glendon's new American style, the U.S. won Gold for forty straight years, the longest winning streak in any single sport in Olympic history.

Susan Saint Sing has participated and coached rowing, and was a member of the 1993 U.S. World Rowing Team. She is the author of The Wonder Crew: The Untold Story of a Coach, Navy Rowing, and Olympic Immortality.

The golden age of American golf featured the sports greatest players at the peak of their careers. Legends such as Bobby Jones, Gene Sarazen, Walter Hagen, and Glenna Collett were embraced by the mass media generating massive exposure for the game, and established the gentlemen's game as a major American pastime.

Few came to define the golden age of golf more than Bobby Jones, whose skill, grace, and integrity captured the nation¹s imagination. The legendary amateur from Atlanta, Georgia, attracted a gallery of 18,000 to watch him take on Eugene Homans in the 36-hole U.S. Open. In 1930, Bobby Jones managed golf¹s greatest achievement, the Grand Slam, by winning the U.S. Amateur Open, British Amateur, U.S. Open and British Open Championships in a single season, an unprecedented and unmatched feat in the history of the game.

David Normoyle is the Assistant Director of the United States Golf Association Museum, and author of Golf¹s Golden Age: Bobby Jones and the Legendary Players of the 10s, 20s, and 30s. 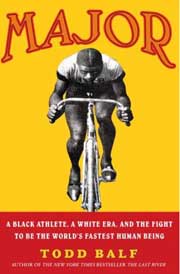 Both a world and national champion, Marshall "Major" Taylor bicycled to glory on three continents. He set seven world record times on the track in 1898, before earning a world championship title 1899. His name ensured high profits as people flocked to see his incredible speed.

Though he earned a substantial fortune he went on to many failed business ventures and even attempted to go to college, but was unbelievably denied entry. He died in a Chicago charity ward in 1932 at age 54, a forgotten and broken man buried in an unmarked grave. A surprising resurgence of interest in his life has led to multiple memorials and sports organizations rallying to secure Major Taylor's place in American Sports history.

Todd Balf, a former senior editor for Outside magazine, has profiled the iconic personalities in pro bicycle racing for numerous national magazines, including Men's Journal, ESPN The Magazine, and Bicycling. He is the author of The Last River and The Darkest Jungle. 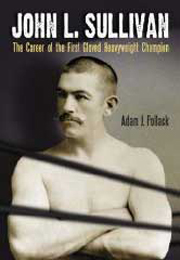 John L. Sullivan, nicknamed the Boston Strong Boy, was the World's First Heavyweight Champion when fighting was bare knuckle and regulated under the brutal London Prize Ring rules. Sullivan's prowess and panache was legendary. At five feet eleven inches and 220 pounds, he fought hard, and he drank hard. Sullivan was the last bare-knuckle champion, and the first one to use gloves after a highly publicized, 75 round fight, against Jake Kilrain 1889. The Kilrain bout helped steer boxing towards the Marquess-of-Queensbury rules, which are still evident in boxing to day. The big differences were the use of padded boxing gloves and timed limited rounds.

His charisma and popular appeal during this transitional period contributed greatly to making boxing a nationally popular, "legitimate" sport. Sullivan became boxing's first superstar and arguably the first of any sport. Upon retirement he gave up alcohol and smoking and tried to maintain his life as a good role model for young men and sportsmen.