The Influence of the École des Beaux-Arts in America 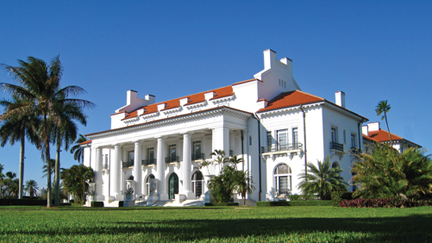 École des Beaux-Arts refers to a number of influential art schools in France. The term is associated with the Beaux-Arts style in architecture and city planning that thrived in France and other countries during the late nineteenth century and the first quarter of the twentieth century.

The most famous and oldest École des Beaux-Arts is the École nationale supérieure des Beaux-Arts in Paris, now located on the city's left bank across from the Louvre, at 14 rue Bonaparte. The school has a history spanning more than 350 years, training many of the great artists in Europe. Beaux-Arts style was modeled on classical "antiquities", preserving these idealized forms and passing the style on to future generations.

The presenter, Dr. Laurie Ossman, joined the Antiquities Coalition Advisory Council in May 2017. Previously, Laurie was the Director of Museum Affairs at the Preservation Society of Newport County. She oversaw the curatorial, conservation, interpretation and academic initiatives at the Preservation Society’s 11 historic properties – seven of them National Historic Landmarks – which range in date from the mid-18th to the early 20th centuries.

Dr. Ossman has also served as Director of Woodlawn Plantation and Frank Lloyd Wright’s Pope-Leighey House in Alexandria, Virginia, during which time she was an affiliated fellow of The American Academy in Rome in historic preservation. She previously served as Deputy Director of Vizcaya Museum and Gardens in Miami; Chief Curator at the Henry Morrison Flagler Museum in Palm Beach, Guest Curator of the Maryland Historical Society’s “Looking for Liberty” state history overview exhibition and Curator and Restoration Project Manager for Cá d’Zan, the Ringling mansion at the in Sarasota, Florida. In addition, she has held research positions at The Smithsonian Institution and The Curator’s Office at The White House.

Dr. Ossman will draw on her wealth of experience as she presents a lecture about the École des Beaux-Arts and its classic style of architechture.

The Architecture of Horace Trumbauer: "The Standard, Metropolitan and Authoritative Thing" 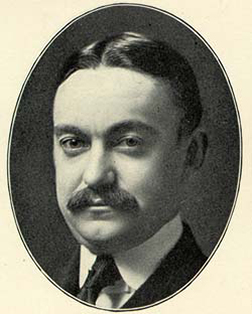 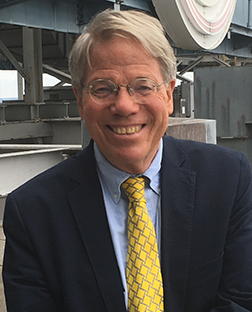 David Brownlee is a historian of modern architecture and urbanism in Europe and America. He has taught for his entire career at the University of Pennsylvania, where he won the Outstanding Teaching Award of the College Alumni Society and the university’s Lindback Award for Distinguished Teaching.

He has written about the nineteenth-centry architecture of Britian, Germany, and France, and an important focus of his scholarship is the architecture and planning of Philadelphia. He has won major publication prizes of the Society of Architectural Historians (USA), its British counterpart, and the American Institute of Architects. He was named a Fellow by the SAH in 2015, which in 2020 established the international Brownlee Dissertation Prize in his honor.

Horace Trumbauer (December 28, 1868 – September 18, 1938) was in many ways the most enigmatic architect of America’s “Gilded Age.” Although he left school when he was 14, by the time he was thirty he had built palatial homes for some of the nation’s wealthiest families, and his office would produce more than 800 designs over the next forty years. In addition to great houses, this included important public buildings such as the Widener Library at Harvard, the Philadelphia Museum of Art, the Free Library of Philadelphia, and the two campuses of Duke University. Trumbauer’s list of clients included many who wintered in Palm Beach, among them the Phippses, Stotesburys, and Wideners. And in 1925 he was commissioned to design the First Church of Christ, Scientist.

Like many successful architects of his day, Trumbauer worked in many styles: Tudor, Italian Renaissance, Palladian, English baroque, Georgian, and French neoclassical. His versatility and quiet competence led the author of a long, admiring review in Architectural Record in 1904 to call his work "the standard, metropolitan and authoritative thing.” But Trumbauer never discussed his work or explained his thinking, and his design methods and the precise authorship of the buildings created in his thirty-person office has been difficult to discover.

Recent research has begun to cast light on Trumbauer’s artistry and the complex collaborations that he orchestrated. Among the important aspects of this teamwork was the key role played by Julian Abele (April 30, 1881 – April 23, 1950) the first African-American graduate of the architecture program at the University of Pennsylvania and the chief designer in Trumbauer’s office. Abele’s artistry was a vital ingredient in some of the firm’s most significant buildings, and despite racial prejudice and Jim Crow restrictions, his role was clearly visible and appreciated by many clients and fellow architects. 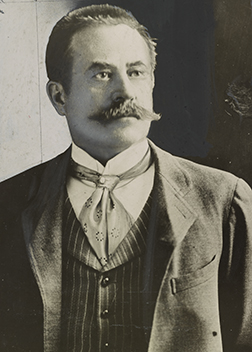 Stanford White (November 9, 1853 – June 25, 1906) was an American architect. He was also a partner in the architectural firm McKim, Mead & White, one of the most significant Beaux-Arts architectural companies. He designed many houses for the rich, in addition to numerous civic, institutional, and religious buildings. His temporary Washington Square Arch was so popular that he was commissioned to design a permanent one. His design principles embodied the "American Renaissance".

In 1906, White was shot and killed at the Madison Square Theatre by Harry Kendall Thaw, in front of a large audience during a musical theatre performance. Thaw was a wealthy but mentally unstable heir of a coal and railroad fortune who had become obsessed by White's alleged drugging, rape and subsequent relationship with his wife Evelyn Nesbit, which started when she was 16, four years before their marriage. She had married Thaw in 1905 and was a famous fashion model who was performing as an actress in the show. With the elements of a sex scandal among the wealthy and the public killing, the resulting sensational trial of Thaw was dubbed "The Trial of the Century" by contemporary reporters. Thaw was ultimately found not guilty by reason of insanity. 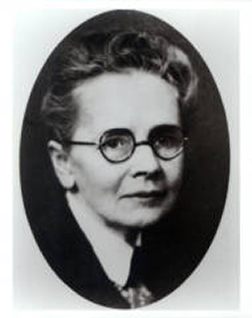 Julia Morgan (January 20, 1872 – February 2, 1957) was an American architect and engineer. She designed more than 700 buildings in California during a long and prolific career. She is best known for her work on Hearst Castle in San Simeon, California.

Morgan was the first woman to be admitted to the architecture program at l'École nationale supérieure des Beaux-Arts in Paris and the first woman architect licensed in California. She designed many edifices for institutions serving women and girls, including a number of YWCAs and buildings for Mills College.

In many of her structures, Morgan pioneered the aesthetic use of reinforced concrete, a material that proved to have superior seismic performance in the 1906 and 1989 earthquakes. She embraced the Arts and Crafts Movement and used various producers of California pottery to adorn her buildings. She sought to reconcile classical and Craftsman, scholarship and innovation, formalism and whimsy.

Julia Morgan was the first woman to receive the American Institute of Architects highest award, the AIA Gold Medal, posthumously in 2014. 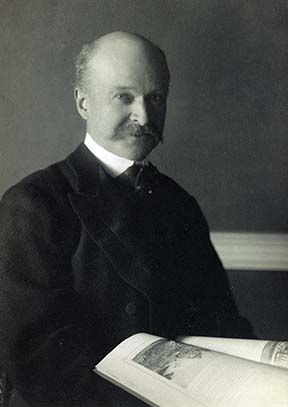 Charles Follen McKim (August 24, 1847 – September 14, 1909) was an American Beaux-Arts architect of the late 19th century. Along with William Rutherford Mead and Stanford White, he provided the architectural expertise as a member of the partnership McKim, Mead & White.

Dr. Richard Guy Wilson is one of America’s best-known experts on historic architecture. He is the Commonwealth Professor in Architectural History at the University of Virginia and has received numerous awards, including the university’s Outstanding Professor award in 2001.

In addition to his success in the academic realm, Wilson has been a TV commentator for PBS and A&E, including America’s Castles, served as a curator for museum exhibitions and published 16 books, including The American Renaissance, McKim, Mead & White, Architects and Edith Wharton at Home. 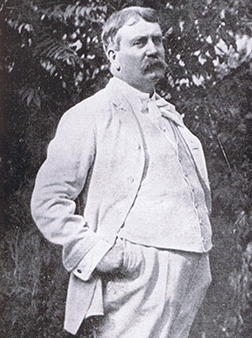 Daniel Hudson Burnham FAIA (September 4, 1846 – June 1, 1912) was an American architect and urban designer. A proponent of the Beaux-Arts movement, he may have been, "the most successful power broker the American architectural profession has ever produced."

A successful Chicago architect, he was selected as Director of Works for the 1892–93 World's Columbian Exposition, colloquially referred to as "The White City". He had prominent roles in the creation of master plans for the development of a number of cities, including the Plan of Chicago, and plans for Manila, Baguio and downtown Washington, D.C. He also designed several famous buildings, including a number of notable skyscrapers in Chicago, the Flatiron Building of triangular shape in New York City, Union Station in Washington D.C., London's Selfridges department store, and San Francisco's Merchants Exchange.

Although best known for his skyscrapers, city planning, and for the White City, almost one third of Burnham's total output – 14.7 million square feet (1.37 million square meters) – consisted of buildings for shopping. 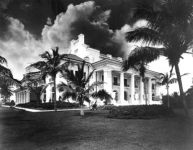 In 1902 the New York Herald proclaimed Whitehall as, “more wonderful than any palace in Europe, grander and more magnificent than any other private dwelling in the World.” Flagler built the home as a wedding present for Mary Lily Kenan Flagler. Carrère and Hastings, who designed Flagler’s Hotel Ponce de Leon,studied at the École des Beaux-Arts in Paris and went on to design many Gilded Age landmarks.

Dr. Ossman is an architectural historian having also worked in curatorial and preservation roles at Vizcaya, Ca’d’Zan, the Flagler Museum, and Monticello, prior to her current position at Woodlawn Plantation and Pope-Leighey House in Mt. Vernon, Washington D.C. She is the author of a forthcoming book on Carrère and Hastings published by Rizzoli International Publications. 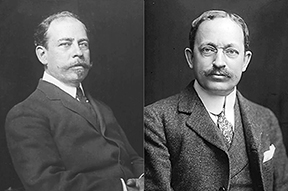 In 1902 the New York Herald proclaimed Whitehall as, “more wonderful than any palace in Europe, grander and more magnificent than any other private dwelling in the World.” Flagler built the home as a wedding present for Mary Lily Kenan Flagler. Carrère and Hastings, who designed Flagler’s Hotel Ponce de Leon, studied at the École des Beaux-Arts in Paris and went on to design many Gilded Age landmarks.

Dr. Ossman is an architectural historian having also worked in curatorial and preservation roles at Vizcaya, Ca’d’Zan, the Flagler Museum, and Monticello, prior to her current position at Woodlawn Plantation and Pope-Leighey House in Mt. Vernon, Washington D.C. She is the author of a book on Carrère and Hastings, The Masterworks, published by Rizzoli International Publications. 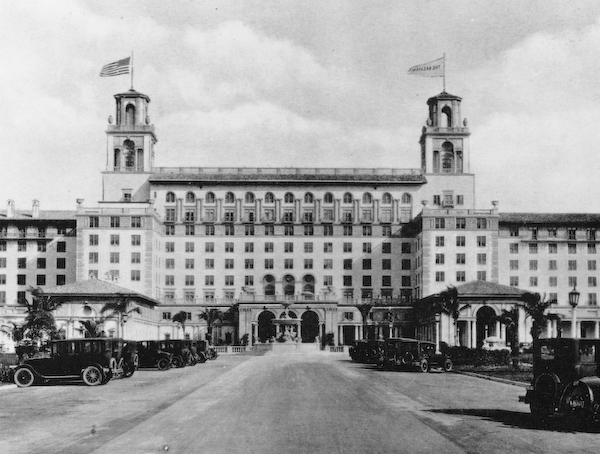 This notable New York-based firm designed The Breakers resort. Schultze & Weaver were commissioned to rebuild the famed resort, and were known later in their careers for their design of several Biltmore Hotels, including those in Miami and Los Angeles. Built in the time of grand hotels, The Breakers stands today as an impressive masterpiece of Gilded Age luxury.

Jonathan Mogul is the Academic Programs Coordinator at the Wolfsonian at Florida International University. He co-authored Grand Hotels of the Jazz Age: The Architecture of Schultze & Weaver. He also wrote the essay Escape and Continuity: The Florida and New York Hotels of Schultze & Weaver, and co-curated an exhibit on the firm’s hotels. A book signing follows the lecture.

Caroline Seebohm is the author of many novels and biographies, including Boca Rococo: How Addison Mizner Invented Florida’s Gold Coast. She has also written for House & Garden, The New York Times, and Town & Country Travel.

John Loring is the author of the new biography Joseph Urban. He is also a former New York bureau chief of Architectural Digest and design director of Tiffany & Co. He graduated from Yale University, has an honorary Doctor of Fine Arts degree from Pratt Institute, and studied at the École des Beaux-Arts. A book signing follows the lecture.

Review: "A crowd of 170 people filled the Ballroom of the Flagler Museum Sunday afternoon to hear architect John Loring discuss the Palm Beach architect once known as the most beautiful man in Vienna." - Christopher C. Paine, Palm Beach Daily News