Between January and March 2015, the following musicians performed at the Flagler Museum. Audio clips from some of the performances have been included for your listening pleasure. 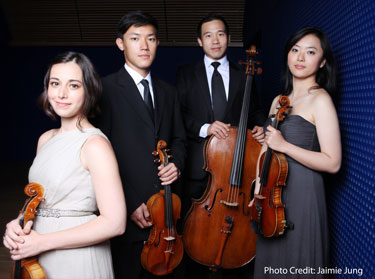 Formed in 2002, the Grammy Award-winning Parker Quartet has rapidly distinguished itself as one of the preeminent ensembles of its generation. The New York Times hailed the quartet as “something extraordinary,” and the Boston Globe acclaims their “pinpoint precision and spectacular sense of urgency.” The quartet began touring on the international circuit after winning the Concert Artists Guild Competition as well as the Grand Prix and Mozart Prize at the Bordeaux International String Quartet Competition in France. Chamber Music America awarded the quartet the prestigious biennial Cleveland Quartet Award for the 2009- 2011 seasons. Beginning in the fall of 2014 the Parker Quartet will join the faculty of Harvard University’s Department of Music as Blodgett Artists-in-Residence.

"Their polished presence and fresh approach make them a formidable force already, and pave the way for even richer musical interpretations as they continue to mature as individuals and artists."
- The Denver Post

"All in all a great start to a great concert series.  One cannot wait for the next installment" - Marcio Bezerra, Palm Beach Daily News

Sold-out houses and standing ovations characterize the performances of the renowned Aspen String Trio. After twenty years of friendship and music-making, Aspen String Trio members David Perry, Victoria Chiang, and Michael Mermagen have joined together as an ensemble with magical synergy. These three world-class instrumentalists each has a long-time association as artist-faculty with the Aspen Music Festival; combined they have performed across the globe in the world's most prestigious venues. "The energy, spontaneity, and sheer enjoyment we find together is a constant inspiration to us, and a joy to our audiences!" They delight in offering—with humor and insight—virtuoso performances of the rich string trio repertoire, including works by Beethoven, Mozart, and Schubert, as well as lesser known works by Dohnany, Hindemith, Martinu, Rozsa, Gideon Klein, Veress, Villa-Lobos and Ysaye, among others. The Trio is the ensemble in residence at the University of Baltimore. A notable upcoming recording project is recording the string trios and other music of Martinu for the Naxos label.

"Their impeccable phrasing, crisp attacks, and near-Germanic warm passion for this music was always in evidence, as was their drive for perfection."
- The Washington Times

"It's what chamber music was supposed to be, and only the Flagler can truly reproduce the experience." "The ensemble and intonation were perfect." - Ken Keaton, Palm Beach Daily News 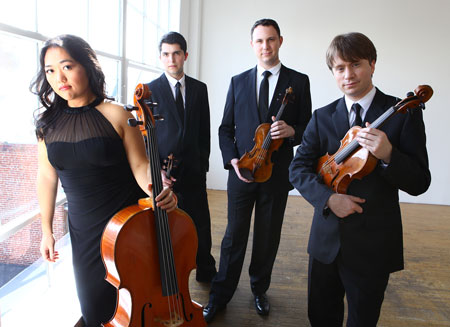 Described as “a miracle of unified thought...” (La Presse, Montreal) and “nothing short of a revelation” (Calgary Herald) the Calidore String Quartet has established itself an international reputation for its informed, polished and captivating performances. The Calidore has already made debuts in such prestigious festivals as Verbier and Ravinia and the Schneider Concert Series (NYC) and is a featured “Young Artist-in-Residence” on American Public Media's “Performance Today”.

Formed at the Colburn Conservatory of Music in Los Angeles in 2010, the Calidore String Quartet quickly won grand prize in virtually all American chamber music competitions including the Fischoff, Coleman, Chesapeake, and Yellow Springs competitions. Internationally they captured top prizes at the 2012 ARD Munich International String Quartet Competition and the 2012 Hamburg International Chamber Music Competition. Their performances and interviews were broadcast on Bayerischer Rundfunk (Munich) and Norddeutscher Rundfunk (Hamburg) as well as being featured on German national television as part of a documentary produced by ARD public broadcasting.

Ardent supporters of music education, the Calidore String Quartet is deeply committed to sharing their passion for chamber music with students and audiences. This has taken the form of pre-concert talks, post-concert Q&A’s, classroom visits, public school assemblies, traditional master classes and multi-day community residencies. The Quartet has held residencies in conjunction with their performances in Arlington, VA, Chicago, IL, Riverside, CA, South Bend, IN, St. Petersburg, FL and at the 2011 and 2012 Laguna Beach Chamber Music Festival. In May 2012, the Quartet partnered with the Bellingham Music Festival and the Whatcom Symphony Orchestra (Bellingham, WA) for a two week residency of over twenty concerts in public schools of Northwest Washington.

"One of the most exciting young ensembles to emerge on the chamber music scene in recent years ... is noted for its fiery brilliance, breadth of musicianship, and palpable energy that engages audiences."
- Performance Today 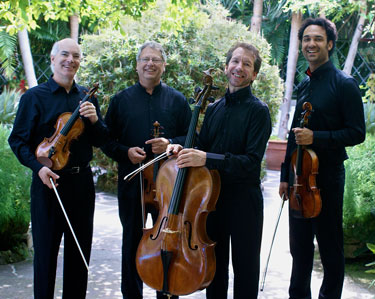 The Fine Arts Quartet, "one of the gold-plated names in chamber music" (Washington Post), ranks among the most distinguished ensembles of our time, with an illustrious history of performing success and an extensive recording legacy. Founded in Chicago in 1946, and based at the University of Wisconsin-Milwaukee since 1963, the Quartet is one of the elite few to have recorded and toured internationally for over half a century. Each season, violinists Ralph Evans and Efim Boico (who have been playing together nearly 30 years), interim violist Juan-Miguel Hernandez, and cellist Robert Cohen perform worldwide in such cities as New York, London, Paris, Berlin, Rome, Madrid, Moscow, Tokyo, Beijing, Istanbul, Jerusalem, Mexico City, and Toronto.

The Quartet's recent recordings have received many distinctions. Their Fauré Quintets CD on Naxos with pianist Cristina Ortiz was singled out by the 2012 Gramophone Classical Music Guide as a "Gramophone award-winner and recording of legendary status", and was among the recordings for which musical producer Steven Epstein won a 2009 Grammy® Award ("Producer of the Year, Classical"). The Quartet's Franck CD was named "Editor's Choice" by Gramophone Magazine in February, 2010, and their Glazunov, Mendelssohn, and Fauré CD's were each named a "Recording of the Year" by Musicweb International (2007-2009). In addition, their "Four American Quartets" album was designated a "BBC Music Magazine Choice" in 2008, their Schumann CD was named "one of the very finest chamber music recordings of the year" by the American Record Guide in 2007, and their Mozart Quintets SACD box set was named a "Critic's Choice 2003" by the American Record Guide. Nearly all of the Quartet's Naxos CDs were selected for Grammy® Awards entry lists in the "Best Classical Album" and/or "Best Chamber Music Performance" categories. Special recognition was given for the Quartet's commitment to contemporary music: a 2003-2004 national CMA/ASCAP Award for Adventurous Programming, given jointly by Chamber Music America and the American Society of Composers, Authors, and Publishers.

The Quartet members have helped form and nurture many of today's top international young ensembles. They have been guest professors at the national music conservatories of Paris and Lyon, as well as at the summer music schools of Yale University and Indiana University. They also appear regularly as jury members of major competitions such as Evian, Shostakovich, and Bordeaux. Documentaries on the Fine Arts Quartet have appeared on both French and American Public Television.

An outstanding career spanning three decades has made the Auryn Quartet one of the most sought-after and respected ensembles performing around the globe. The members of the quartet have not changed over this long period, and continues with its fresh and pioneering approach to all genres of music.

The Quartet won its first prizes at the London International Competition and the ARD Munich competition, both in 1982, only one year after the group's inception. The ensemble also won the main prize at the European Broadcasting Competition in Bratislava in 1989.

Invitations to most international music festivals followed in quick succession: Lockenhaus, Salzburger Festspiele, Edinburgh International Festival, Musiktage Mondsee, Schwetzinger Festspiele, and Stavangar festivals just to name a few. Recent tours have taken the Quartet from the Lincoln Center in New York, to the Concertgebouw in Amsterdam, and also to the Wigmore Hall in London, where they performed a complete cycle of the Beethoven quartets.

The four musicians of the Auryn Quartet play on wonderful Italian instruments: a Stradivari violin (1722, ex-Joachim), a Petrus Guarneri violin, a Brothers Amati viola (1616) and a Niccolo Amati cello. Since 2003 the Auryn Quartet has been sharing its wealth of experience with musicians of younger generations, in the form of a teaching position at the Music Academy in Detmold, Germany, where they are professors for chamber-music.

The Auryns have a compelling discography, working exclusively with the Tacet company since 2000. The most recent and ambitious recording project is the edition of all 68 Haydn quartets.

The Auryn Quartet´s recording of all the Beethoven quartets was released to overwhelmingly ecstatic reviews:

"...At times, the Auryn performances seem so close to what one sees unfolding on the printed score that it is possible to believe you are hearing directly what Beethoven had in mind."
- Gramophone