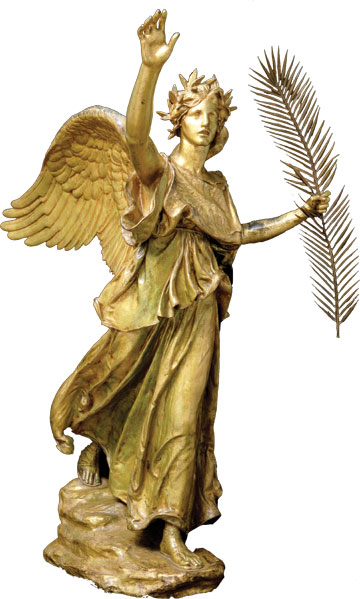 Born to immigrant parents, Saint-Gaudens began his career in 1861, at the age of thirteen, when he was apprenticed to the cameo cutter Louis Avet. He left for France in 1867 to study at the École des Beaux-Arts and was immersed in the art world of Paris and later Rome. Upon his return to the United States, Saint-Gaudens began to build his reputation as a modern artist, reinvigorating and advancing American sculpture.

Saint-Gaudens was a great portrait artist, creating more than one hundred sculptural portraits. He also carried out a number of commissions for major monuments. Works such as his Lincoln Monument and Adams Memorial changed the public's perceptions of civic sculpture. Saint-Gaudens's Civil War monuments stand out for their quiet dignity and inherent strength of character. The sculptor's artistic collaborations with important painters and architects of the day yielded decorative work and monuments of unrivaled power and beauty.

Saint-Gaudens also created significant medals and coins. His 1905 Special Inaugural Medal for Theodore Roosevelt impressed the President so much that the he asked the master artist to redesign the 1907 United States gold coinage. Saint-Gaudens's designs for the ten- and twenty-dollar gold coins are considered to be the most beautiful ever created, and are highly coveted by collectors.

By the end of his life, Saint-Gaudens had created a uniquely American style of sculpture that focused on simplicity of subject, realism of form, and strength of emotion. By taking a new approach to sculpture, and in educating young American artists, Saint-Gaudens played an unsurpassed role in developing America's artistic character and revitalizing the art of sculpture in the modern age.

This magnificent exhibit, organized by the Trust for Museum Exhibitions, Washington, D.C. in collaboration with the Saint-Gaudens National Historic Site, Cornish, New Hampshire, explores the evolution of Saint-Gaudens's art through sixty of the sculptor's most iconic works. The collection illustrates the breadth of work that established Saint-Gaudens as America's premier sculptor.

The Flagler Museum hosted a Kids Sculpture Class on February 24, 2007, in conjunction with the Augustus Saint-Gaudens Exhibit. Children learned about the art of sculpture through hands on activities with a local sculptor.