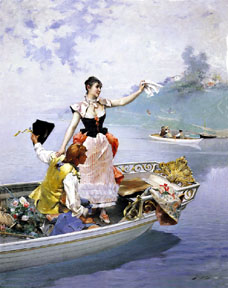 For decades the popular view was that Flagler did not collect in any serious way, however like many things about Henry Flagler, when it came to collecting paintings, there was much more to Flagler than one might expect. Research during the last five years has brought to light the fact that Flagler collected in a manner which was quite typical of the time and his social position. Amassing a collection of more than 180 paintings during his lifetime.

Unfortunately, many of Flagler's paintings were scattered when his Palm Beach Winter estate Whitehall was sold to a group of investors in the 1920s. And, until recently, little has been known about the paintings which once hung in Whitehall and at Flagler's other residences and hotels.

This new exhibit and catalogue document not only Flagler's extensive paintings collection, but also the tastes of his time. Through this exhibit and catalogue it is hoped that a new era in history of the Flagler Museum and Whitehall will be launched. An era in which many of the important paintings which once belonged to Henry Flagler will eventually be returned to Whitehall.

Join the Chief Curator of the Flagler Museum as she discusses Flagler as a collector as part of the 17thAnnual Whitehall Lecture Series.