The Games We Played: American Board and Table Games from the Liman Collection

Cultural aspects of nineteenth-century America come to life through The Games We Played, a captivating exhibition that provides an entertaining and highly instructive look at the values, character, and world view of Gilded Age Americans. Curated by the New York Historical Society and the Flagler Museum, the exhibition is made up of board games, card games, puzzles, and blocks dating from 1870 to 1910. On one level, the games offer contemporary viewers rich and playful examples of Gilded Age graphic design. On another, they are revealing fragments of our cultural history, documenting the nation's values and aspirations as it recovered from the Civil War, absorbed tens of millions of new immigrants, and became a world power. The games reflect the period's attitudes toward religion and morality, wealth and success, technology and progress, and education and occultism.

More didactic than their twentieth-century descendants, the games of the Gilded Age endeavored to teach skills, such as reading and geography, and to impart values, such as ambition and piety. One section of the exhibition features games like The New Pilgrim's Progress, which sought to convey social values. Another addresses ambition and success through games such as Bulls and Bears: The Great Wall St. Game and others in which messenger boys rise to become captains of industry.

Board games have been around for over 4,000 years. Beyond their intended purpose of providing entertainment, games are documents of the societies that created and played them. During the second half of the 19th century, several significant cultural and technological developments combined to produce an explosion in the manufacture of American board games. As the nation grew increasingly urban and industrialized, the spheres of home and workplace became more distinct. Middle-class families, with expanded leisure time as well as rising income levels, embraced leisure pursuits in the home -- the center of education, entertainment, and moral enlightenment during the Gilded Age. 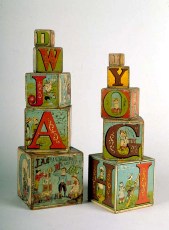 At the same time, improvements in printing and paper manufacture enabled large-scale commercial production of board games. Most important were advances in chromolithography, a color printing process perfected in the 1870s that produced bold, richly-colored images at affordable prices. A typical middle-class household of the period could readily purchase such games, whose prices ranged from 25 cents for small boxed card games to three dollars or more for elaborate editions. New York City, the nation's business capital, emerged as the leading center of American chromolithography and the hub of the nation's vigorous board game industry.

The games displayed in this exhibit graphically illustrate the changes effected by the chromolithography revolution. Early games, such as The Game of Dr. Busby (1843), tended to be small and were produced by hand-coloring a monochrome print, a time-consuming and expensive process. As manufacturers adapted chromolithography to board game production in the 1870s, board game boxes grew larger and more colorful, often featuring bold graphics. By the turn of the century, New York City-based McLoughlin Brothers dominated the industry with sumptuous, eye-catching packaging that was frequently more compelling than the games it contained.

Although the arrival of radio and television in American homes dampened the games industry as the 20th century unfolded, board games remained a staple of wholesome family fun and "edu-tainment." In times of crisis, Americans have found relief in the distraction and companionship of board game pursuits. At the outbreak of the Civil War, sales of board games soared as families turned inwards to grapple with the deep split wrenching the nation. During the war's first winter season, The Checkered Game of Life sold an unprecedented 40,000 copies. Most recently, in the wake of September 11, 2001, traditional games experienced another surge in popularity as families and friends came together to cope with the tragedy and find consolation and strength within their intimate kinship circles. 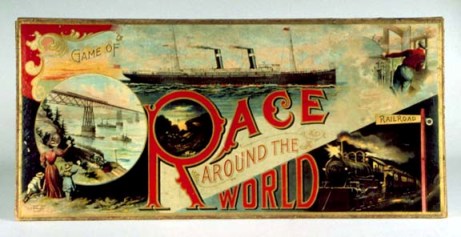