Untamed: The Art of Antoine-Louis Barye 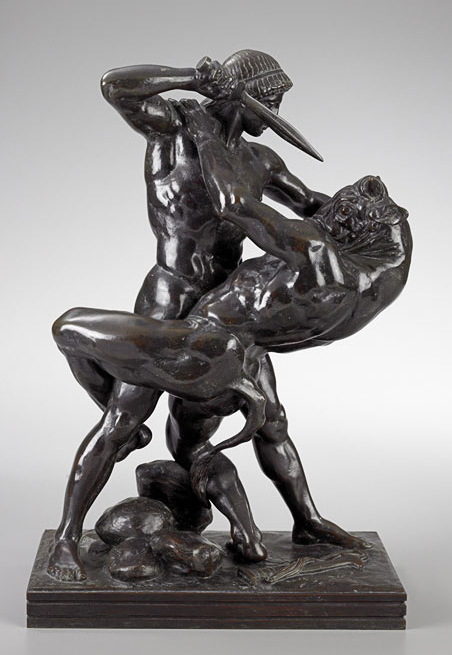 The winter exhibit features more than 90 works from the French Romantic Artist Antoine-Louis Barye (1796–1875), the foremost animal sculptor or animalier of the 19th century. The exhibit is drawn primarily from the Walters Art Museum's Barye collection, which rivals the Louvre's Barye collection both in scope and significance, and includes sculptures from the Flagler Museum Collection.

Untamed will emphasize the full range of Barye's production, including not only his well-known bronze sculptures but also his oil paintings, watercolors and sketches. These artworks reveal the breadth of his subjects including: game animals, mythological creatures, animal combat scenes and the human form. Auguste Rodin was an early pupil of Barye, and Barye's work was a source of inspiration to Henri Matisse and Paul Cézanne as well.

Barye produced some of the most technically experimental and controversial sculptures of the 19th century. Drawing on recent scientific discoveries, the exhibit will examine the complex techniques employed by Barye. He also pioneered the production of extensive editions of bronzes for the Roger and Angelicarapidly expanding middle-class.

Acclaimed by the critic Théophile Gautier as "the Michelangelo of the menagerie," Antoine-Louis Barye was known principally as an animal sculptor, but he was also a consummate modeler of the human form. Less familiar to both his contemporaries and today's viewers are Barye's oil paintings and watercolors, and his role as a member of the Barbizon School of artists. The exhibition will explore, for the first time, the complex relationship between Barye's bronzes and drawings. Special attention will also be given to distinctions between contemporary and posthumous casts. In addition, the artist will be placed within the context of the controversial critical debates surrounding his work both during his formative years in the 1830s and in the course of the Second Empire. In his later years, much of his support came from American collectors, such as Henry Walters, and this aspect of Barye's patronage will be examined in detail as well.

The exhibit was organized by the Walters Art Museum in Baltimore from its renowned holdings. Works on display include those collected by William T. Walters, a wealthy businessman and friend of Henry Flagler. The exhibition will also feature three significant works by Barye in the collection of the Flagler Museum. A beautifully illustrated exhibition catalog is available through the Museum Store.

In conjunction with the winter exhibit the Museum will host a Children's Sculpture Class. Children will take a special guided tour through Untamed: The Art of Antoine-Louis Barye, and learn sculpture techniques during a hands-on class with a local sculptor. The class is suitable for ages 8 - 14.