Between January and March 2014, the following musicians performed at the Flagler Museum. Audio clips from some of the performances have been included for your listening pleasure. 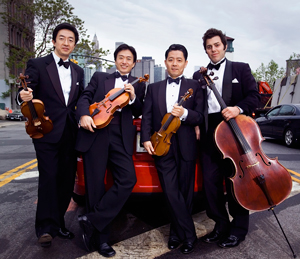 Renowned for its passionate musicality and impressive technique, the Shanghai Quartet has become one of the world's foremost chamber ensembles. Its elegant style melds the delicacy of Eastern music with the emotional breadth of Western repertoire, allowing it to traverse musical genres from masterpieces of Western music to cutting-edge contemporary works.

Formed at the Shanghai Conservatory in 1983, the Shanghai Quartet has worked with the world's most distinguished artists and regularly tours the major music centers of Europe, North America and Asia, from the Beijing International Music Festival to Carnegie Hall and Lincoln Center. Among innumerable collaborations with noted artists, they have performed with the Tokyo, Juilliard and Guarneri Quartets, Yo-Yo Ma, Lynn Harrell and Peter Serkin.

"If there is a string quartet currently in circulation that produces a more beautiful sound than the Shanghai Quartet, the name doesn't immediately come to mind."
- The New York Times

"All together they make such an amazing sound that I hardly ever remember hearing anything so grand, so majestic from a string quartet ... Playing of this caliber is rarely heard." - Rex Hearn, Palm Beach ArtsPaper

Yoonie Han and the Gloriosa Trio 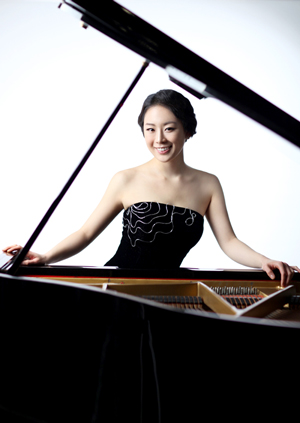 South Korean pianist Yoonie Han is praised for her “flowing tones, poetic phrasing, and heavenly singing melodies” (Cincinnati Enquirer) and “her musical imagination and feel for complex textures drew vivid images” (Washington Post). She has won top prizes in distinguished international competitions and the highest accolades for her poetic performances in major concert halls in the U.S. and around the world.

In 2009, Ms. Han was honored with the Gawon Music Award as the “most brilliant pianist aged 17 to 31 of any nationality who possesses the most promising potential for global prominence.”

Yoonie Han is a Steinway Artist and has toured Steinway Halls in the USA and Europe.

This concert is the debut of Ms. Han's new piano trio, Gloriosa Trio. The trio is comprised of Arnold Choi, one of the most celebrated cellists in North America, and violinist Jennifer Carsillo, an enthusiastic and avid chamber musician.

Arnold Choi plays a Stradivari cello from 1696, on loan to him from the Canadian Council for the Arts. He was the cellist of the former Janaki String Trio and laureate of the Isang Yun International Cello Competition and Carlos Prieto International Cello Competition. Violinist Jennifer Carsillo has appeared as a soloist with orchestras throughout the United States, as well as in Russia and Austria. Jennifer Carsillo's latest commercial recording showcases her unusual gift as a narrator with many voices in Bradford Ross' A Family for Baby Grand.

"This young pianist has put flawless technique, musical artistry and maturity far beyond her years, together into a terrific package.”
- Cincinnati Enquirer 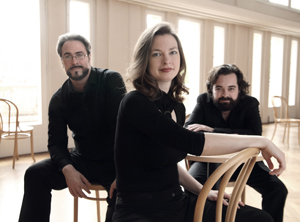 Founded in 2003 by violinist Annette von Hehn, cellist Stefan Heinemeyer and pianist Thomas Hoppe, the Atos Trio strives to convey the spirit of string quartet playing to the piano trio realm. Never shying from extremes, the ensemble aims to push limits when it comes to sound and dynamics and is known for its honesty of interpretation.

The 'Kalichstein-Laredo-Robinson International Trio Award' recognized the achievement of the Atos Trio and awarded this distinction to the trio in 2007. It offers the winners twenty important US concerts including a debut concert at New York's Carnegie Hall and performances in Chicago, Cincinnati, Los Angeles, Detroit, Kansas City and Tucson. In the same year, at the '5th Melbourne International Chamber Music Competition', the Atos Trio took not only the First Prize but also the Grand Prize, the 'Musica Viva Tour Prize', and the 'Audience Prize'. Never before in the history of this competition, held only every four years, has a single ensemble acquired all those honors. Most recently, the Atos Trio became BBC Radio 3 "New Generations Artists" for 2009/2011 for a number of recording sessions and to be part of important music festivals in Great Britain during the 2010/11 and 2011/12 seasons.

The Atos Trio has performed hundreds of concerts and appeared at prestigious festivals such as the Schleswig-Holstein Music Festival, Rheingau Music Festival, Festspiele Mecklenburg-Vorpommern, Ludwigsburger Schlossfestspiele, Festspiele Schwetzingen, the City of London Festival, Budapest Spring, and Enescu Festival (Bucharest). During the last season, the Atos Trio has given important debuts at Wigmore Hall (London), Carnegie Hall (New York) and the Concertgebouw (Amsterdam), all to capacity audiences and critical acclaim.

“This German group … has risen steadily through the ranks to become one of the elite piano trios before the public today.”
- The Washington Post

"They are clearly bound to become a reference among piano trios. May we hear them back soon."
- Márcio Bezerra, Palm Beach Daily News 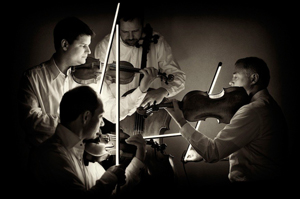 For several decades, the Talich Quartet has been recognized internationally as one of Europe’s finest chamber ensembles, and as the embodiment of the great Czech musical tradition. The Quartet was founded in 1964 by Jan Talich, during his studies at the Prague Conservatory, and named for his uncle Vaclav Talich, the renowned chief conductor of the Czech Philharmonic. During the 1990s, there was a gradual and complete change in personnel, rejuvenating the Quartet while continuing the tradition of its predecessors through involvement in a wide spectrum of musical engagements and recording activities. Jan Talich, the current first violinist, is the son of the Quartet’s founder.

The Talich’s recordings of the complete string quartets by Felix Mendelssohn, released on the Calliope label between 2001 and 2004, have been widely praised. Other recording projects include, also for Calliope, Dvorak’s “American” quartet and viola quintet (2003), Smetana’s two string quartets (2003), and a live recording of Schubert’s “Death and the Maiden” and the Dvorák Quintet (2004). The Quartet’s Janácek recording was honored by Gramophone with a nomination for the best chamber recording of 2006—the only recording by a string quartet to be selected.

“The program served up … an object lesson in everything chamber music should be: civilized, intelligent, challenging and performed on the highest musical level.”
- South Florida Classical Review

"The Flagler Museum closed its 15th Music Series on a high note, thanks to a superlative performance by the Talich Quartet."
- Márcio Bezerra, Palm Beach Daily News

"The Flagler Museum Music Series ended its season Tuesday with the world famous Talich Quartet, and it was an evening of glorious music-making."
- Rex Hearn, Palm Beach ArtsPaper