Between January and March 2016, the following musicians performed at the Flagler Museum. Audio clips from some of the performances have been included for your listening pleasure.

In July 2009 the New Orford String Quartet arose from the fame and tradition of its glorious predecessor, giving its first concert for a sold-out audience at the Orford Arts Centre. Hailed for their "ravishingly beautiful tone" as well as their "extraordinary technical skills and musicianship" the members of the New Orford String Quartet are all principal players in the Montreal and Toronto Symphony Orchestras. In the short time since its creation the New Orford Quartet has seen astonishing success, giving annual concerts at the Orford Arts Centre for national CBC broadcast and receiving unanimous critical acclaim, including two Opus Awards for Concert of the Year.

In 2011 the New Orford String Quartet released its debut album of the final quartets of Schubert and Beethoven on Bridge Records to international acclaim. Hailed as one of the top CDs of 2011 by La Presse and CBC In Concert and nominated for a JUNO Award in 2012, critics have described the recording as a "performance of true greatness and compelling intensity... stunning!" (Audio Video Club of Atlanta), "flawless... a match made in heaven!" - Classical Music Sentinel, "a performance of rare intensity." - Audiophile Audition and "nothing short of electrifying... listen and weep." - The Toronto Star

"The playing and precision of the New Orford was exquisite. Their warm, smooth, silken sounds, as these beautifully intertwined melodies unfold, speak to the very heart of Beethoven's genius."
- Rex Hearn, Palm Beach ArtsPaper

The Vega String Quartet, Quartet in Residence at Emory University, is creating and cultivating a new generation of passionate and educated chamber music lovers. The New York Times raved that their "playing that had a kind of clean intoxication to it, pulling the listener along...the musicians took real risks in their music making..." and "The music simply took over and created a space of its own. The musicians played with a deceptive simplicity and fluidity that made difficult passages seem childlike in their straightforwardness. Big, strong playing...excellent ensemble. Crisp, clear precision." The Los Angeles Times praised their "triumphant L.A. debut".

"The music simply took over and created a space of its own. The musicians played with a deceptive simplicity and fluidity that made difficult passages seem childlike in their straightforwardness. Big, strong playing...excellent ensemble. Crisp, clear precision." - The New York Times

A portion of the Vega Quartet's rendition of Felix Mendelssohn's String Quartet No. 4 in E minor, Op.44/2 for the Flagler Museum Music Series was featured on American Public Media's "Performance Today" on May 16, 2016. 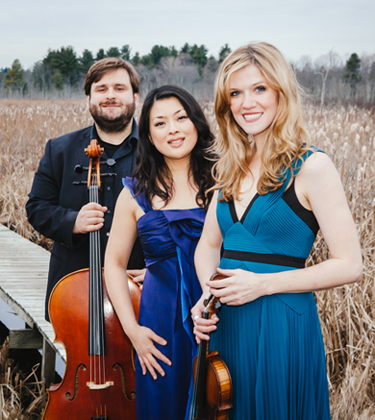 'Neave' is a Gaelic word, which, according to this youthful piano trio's web-site, means 'bright and radiant'. The trio, whose members hail from the USA, Scotland and Russia, has enjoyed international success, performing across the United States, South America, UK and Europe in some of the world's finest concert halls.

Hailed by critics as "absolutely stunning" and nominated as the "Best of Boston" by the Boston Phoenix, the Neave Trio (Anna Williams, violin. Mikhail Veselov, cello, Toni James, piano) is the Trio-in-Residence at San Diego State University.

Members of the Neave Trio have been recipients of the Lilian Fuchs Chamber Music Prize, the Gartoff Foundation Prize and the Eastman Chamber Music Honors Prize. All rising young soloists, the Neave Trio has enjoyed international concert and competition success spanning four continents, with recent notable performances in Guatemala, Belgium and Russia, as well as a recital appearance at the British Embassy in Oslo, Norway. The Trio has won several prestigious performing ensemble residency positions in the Northeast USA, including residencies at Providence College (Rhode Island), the Gann Academy and St. Marks International Chamber Music Institute and Festival (both of Massachusetts), as well as the prestigious Chamber Music Residency at the Banff Centre (Canada).

"...if I've claimed repeatedly that we are blessed to be living in a golden age of. . . chamber music making, let me up the ante by saying that we have exceeded the gold standard and have now moved on to platinum. Yes, the Neave Trio is that good. . . This quite simply is the most rapturously beautiful performance of Fauré's Trio I've ever heard. It blows away . . . countless others I've heard, but not reviewed, among which are the Beaux Arts . . . You can look for this on my 2014 Want List, because it's definitely going to be on it." - Fanfare Magazine.

"Every concert at the Flagler Museum Music Series is special, but the latest installment by the Neave Trio was even more so."
- Marcio Bezerra, Palm Beach Daily News

Founded in 1998 and named after violinist Antonín Bennewitz, who was a seminal figure in the creation of the Czech violin school, the Quartet has performed in the Czech Republic and in major venues throughout Europe In 2003 the Queen of Spain presented them with the diploma for outstanding student performance at the Escuela Superior de Música Reina Sofia in Madrid. A year later they were awarded the Czech Chamber Music Society Prize.

Established in 2007, the Meccore String Quartet is one of Poland's most compelling young ensembles. For many years they have been a treat for music lovers in Europe and America, and have performed in the most important music festivals throughout Europe.

The quartet has received numerous awards during prestigious chamber music competitions. In 2012 and again in 2014 it received the Irene Steels-Wilsing Stiftung award. In April 2012 Meccore won a 2nd prize, as well as awards for the best performance of Wolfgang Amadeus Mozart's and Joseph Haydn's quartets, and for the performance of Brett Dean's composition at the Wigmore Hall String Quartet Competition in London. In 2011 they were given the Finalist Award and the Special Award at the International String Quartet Competition "Premio Paolo Borciani" in Reggio Emilia. Also in 2011 Meccore String Quartet was nominated for the "Paszport Polityki" Award in the classical music category for their innovative approach to music and for breaking the musical stereotypes. In 2010 the quartet won the 1st place at the International Chamber Music Competition in Weiden (2nd and 3rd prizes were not awarded). In 2009 the musicians were awarded the 1st prize of the Max Reger International Chamber Music Competition in Sonderhausen.

The members of Meccore teach at the Ignacy Jan Paderewski Academy of Music in Poznan and Fryderyk Chopin University of Music in Warsaw.

"Chamber music at the highest level, presented thrillingly and with zest." - Suddeutsche Zeitung.

"The best for last: That sums up the closing concert of The Flagler Museum Music Series, which featured the Meccore Quartet."
- Marcio Bezerra, Palm Beach Daily News